I have been very honored to hear from some young brothers and sisters that are just starting their careers in the fire service via both this blog and the Facebook page. I always like hearing from these younger members who are eager to soak up anything fire service related. It reminds me why I continue to be involved in training and why I m so passionate about it. It also reminds me that there is an opportunity to mold these young firefighters. Not into mini-me’s or anything but into good, solid young firefighters who will grow into excellent firefighters as their knowledge and experience increases. So it is with these young lumps of clay in mind that I write this post. Some of you older lumps of something or others may find it helpful too…

So why is this post titled “Free Agency” and why is there a picture of a guy wearing a free agent t-shirt? Remember something, my rookie phenoms. You are the Michael Jordan’s; the Patrick Kane’s and Jonathan Toews; the Ben Roethlisberger’s; and the Hope Solo’s. You’ve picked your team, er, your department. You’ve been assigned your teammates, the guys and girls you’ll take field with. But guess what? In something that is very unique to our job you get to pick your coach. You may have been assigned a Lieutenant, Captain or a mentor by your department who is officially responsible to oversee your probationary period and make sure you get all of your required items checked-off in your first year, but they don’t have to be your career-long mentor. Your true coach. You are a free agent. You, and only you, get to decide who gets that honor. The honor of having you as someone who looks up to them. Someone who goes to them for knowledge and experience and guidance. Choose wisely and it will serve you well for your entire career.

One of my past part-time jobs was as a flight-paramedic on a helicopter out of a local trauma center. This trauma center was also a teaching hospital for both future doctors and nurses. It gave ample opportunity to teach not only for formal educators i.e. the Doctors and Nurses that actually taught in the programs but also the Doctors, Nurses, Techs and guys like me who worked there as well. Anyway, one day a local ground ALS unit was inbound with a gunshot wound to the chest. I was working the helicopter that day and happened to be in the ER at the time. We were allowed to assist in the ER with codes and traumas and such so I thought I’d stick around and see if this turned out to be anything good. Soon, the attending trauma surgeon entered the trauma bay followed by his gaggle of doctors-in-training. He started shooting questions at them; what are things to be looking for; what could complications be; what should our interventions for those complications be etc. The medics rolled through the door soon after and it was immediately clear that the situation was critical. CPR was in progress, blood was everywhere, two large-bore IV’s that were almost empty etc. etc. The patient was transferred over to the ER bed and the assessment was begun. The patient had been shot once in the left upper chest with an unknown caliber gun. Never conscious at the scene. CPR in progress the whole time. Weak pulses with CPR, nothing without. The trauma surgeon went right to work but was still shouting out questions and listening for answers the whole time he was working. The pt wasn’t intubated so he looked at me and asked if I mined helping one of his “kids” with the intubation. After that, and purely for the teaching aspect I think, the decision was made to crack the patient’s chest right there in the ER. Even the ER staff was like, “holy crap.” So after the chest was open we saw the problem. That problem was a very large hole in the patient’s left ventricle of his heart. The trauma surgeon didn’t get excited, he didn’t back away and declare the patient dead. He calmly asked for a foley catheter. One of those catheters that goes in the end of a penis to drain urine from the bladder into a bag. The nurse he asked did a double-take and he calmly repeated his request. She went and got the foley and handed it to him. He took it out of the packaging, inserted the end that would normally go into the penis and then up into the bladder into the hole in the heart, inflated the balloon on the end of the catheter that normally would hold the catheter in place in the bladder, asked one of his students to hold the tubing and collection bag and “make sure this doesn’t fall out”, and then told the nurse in charge of the trauma bay to call the operating room and let them know they were on their way. Everyone, myself included, looked around stunned. Where the hell had he learned that?! For the non-medical type peeps out there, the balloon on the end of the catheter plugged the bullet hole in the heart, the catheter drained the blood into the collection bag to be transfused back into him later. He hadn’t learned that in medical school, he learned it while serving in Vietnam. If you want to look at it in our terms, he didn’t learn it in the academy or in his probie year, he learned it after. When it counted. From people who had been there and done that. Get where I’m going with this? Medical school, the fire academy, high school, it’s all the same. It’s the basic preparation for what you will need to perform in your job or in life where most of the real learning will come from doing and experiencing. But you can’t just hope to stumble upon things on your own. You can’t just hope for “a-ha” moments to happen throughout your career. You need someone to help and guide you with the things that don’t ordinarily get taught as part of a regular curriculum. You need a Yoda. 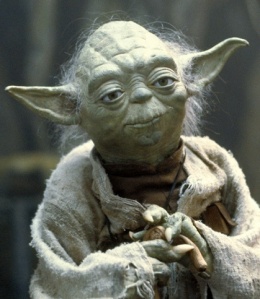 As long as you have someone assigned to you who is half-way competent at their job and can teach you those things you’ll be ok. Picking your Yoda, your career coach, is something else. It doesn’t need to be done in that first 12-months. Make sure you have a job first. Take that time to look around and see who really has a passion for the job, not just who comes in and does the job. Who’s the guy or girl who’s still out on the apparatus floor doing a little extra spit and polish on the rigs or tools after everyone else is sitting having a cup of coffee? Who can seemingly answer almost any question with a reasonable answer but if they don’t know something then takes the time to find out and share the knowledge? Who might join in on the inevitable kitchen table airing of the grievances but then actually offers solutions to the problems and tries to mediate what’s going on instead of simply fanning the flames? Who is the guy or gal that loves this job? Maybe that’s who you should be thinking about to be your tour guide through fire service life.

Not everyone picks a coach. Some guys, most guys maybe, don’t. They make it through their probie year and figure they’ve got it made. They figure they learned what they needed to learn and that they’ll get what else they need in drills and whatever future classes they’ll take for certifications. But there are so many more things to learn about this job than just what you’ll learn in drill or at those classes. Maybe that’s why you’re reading this website in the first place. Obviously a mentor, a coach, doesn’t have to be just one person. You can pick up as many things from as many people as you can in this career. And we all know that you can learn just as much from people that you don’t want to emulate as those that you do. But you should find a couple people on this job whom you can consistently go to for solid advice. For good direction. For answers to questions that other people seem to be guessing at. But take the time to evaluate who you want those people to be. You are the free agent. You are the rising star and you don’t want to sign with just anyone. So take a look around and see who’s making the best offer to help you and career. And then go play your heart out, kid!